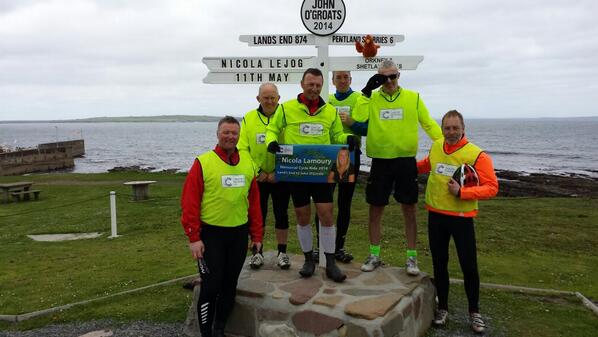 We seem to have some endurance sport enthusiasts in our midst! Last week saw Peter Mason from www.signsandvehiclegraphics.co.uk take part in a memorial ride from Lands End to John O’ Groats with a team of 5 others. The ride was organised in memory of Nicola Lamoury who passed away last October and to raise money for www.cancerresearchuk.org The guys set off from Lands End on Saturday 3rd May and arrived at John O’ Groats on Sunday 11th. They were joined on the Barton to Carlisle leg of the journey by colleagues from James Alpe who took part just for the day. The team have raised over £23k so far and the money keeps rolling in. A fantastic achievement to all involved, the cyclists, support team (who supplied awesome food) and everyone who has kindly donated including random motorists who stopped and gave the guys money as they pedaled along! Following on from this our Vehicle Conversions Manager Steve Bennett is taking part in the ‘Scottish Islands Peaks Race www.scottishislandspeaksrace.com which takes place later this week. It’s a sailing and running event which takes place over three days. During this time Steve and his team mate will run over 60 miles, covering 11,500 meters of ascent and sail 160 nautical miles. We wish them every success in this crazy event which can be followed on twitter @sipeaksrace